In Loving Praise of Restraint in Metal Gear Solid V

23/05/2016 Games, Reviews Comments Off on In Loving Praise of Restraint in Metal Gear Solid V 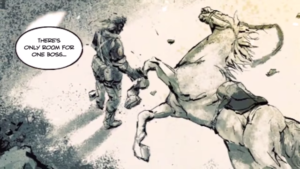 One of the first critiques you will hear as a creative writer of any kind is this: show, don’t tell. The Metal Gear Solid franchise has never taken that piece of advice (not that I’m complaining) until we were allowed to get into the head of Big Boss in Metal Gear Solid: Peace Walker. The beautiful drawn cutscenes by Ashley Wood draw a wordless parallel between Naked Snake shooting The Boss in Russia in the 60’s, to the present day 1970’s where he puts down her horse in Costa Rica. The Snakes often say little about how they feel, but this scene is where Kojima really shows what he’s learned since Metal Gear Solid IV, and uses visual storytelling to say things without using words. It’s important especially in the context of Peace Walker, where Big Boss navigates a second time what The Boss taught him, or at least, what he thought she had taught him. If she had been entirely open with him in the first place, he may have not still struggled with her message.

And that leads us to the controversy of Metal Gear Solid V: The Phantom Pain. There is very little in the narrative that is simply told to the player. For many fans of the earlier titles in the series, The Phantom Pain was a disappointment. As a fan myself, I understand why. I, too, miss the long codec conversations about military history and characters’ personal histories. The sacrifice of these though (and adaptation into fewer, more carefully selected tape recordings) earns MGSV an A+ in game design. The medium is the message in The Phantom Pain, and the message is about silence and projection.

I feel like here I need to leave a disclaimer that 1: there are spoilers ahead and 2: I was not on board the MGSV hype train leading up to the game’s release in October 2015. I bought a playstation 3 for the sole purpose of having it for the Metal Gear Solid IV release, and after that I gave up on the Metal Gear franchise entirely. Not because I was unhappy with IV (I wasn’t! I was pleased with it, although I have some issues with it now) but because I didn’t want to encourage a franchise that Kojima no longer wanted to make. So when I came home to Canada in mid-October 2015 to find my roommates deep in Metal Gear Solid hell, I played Peace Walker, Ground Zeroes and The Phantom Pain in one go, without any expectations of what any of these games entailed. Considering the angst much of the fandom went through waiting, I wouldn’t have it any other way. I realize, however, that the marketing of MGSV led to certain expectations of the game that were not met, and it’s important to understand that this was not how I experienced it.

There must be other reviewers out there who have said this about The Phantom Pain better than I have, but I’m going to say it anyway: the story is about silence and projection caused by that silence. Or if it helps, we can think about it more literally as a phantom pain. The pain comes from a limb that does not exist (silence) but our brain treats as if it is there (projection).

The silence can be seen in active gameplay with codec conversations replaced with brief radio calls, to more obvious things like a non-verbal sniper named Quiet. No longer do we have a Big Boss who gives romantic advice, or discusses Che Guevara over radio communication. Now we have a silent Venom Snake who is a shell made up of expectations of him. His silence leads to him being an object of projection, both by the characters and the player.

We, the players, project our expectations onto Venom Snake because his silence leaves no contradiction. There is no reason we are given to not believe that Venom Snake is Big Boss. He looks the same, he sounds the same, and while the actions he takes in major plot events may not seem quite right, we are given no reason to believe that he is anyone other than Big Boss.

In many ways, the player is in the same place as Snake’s XO, Kazuhira Miller. The reveal at the end of the game tells us that Kaz also had no idea about Snake’s true identity, and in his own way projected his expectations and understanding of Big Boss onto Venom. The whiplash of the twist of The Phantom Pain hurt many players, and it pains Kaz infinitely more, as he walks off and swears his revenge. All along, for both Kaz and the player, Venom Snake was the phantom limb in the place of the real Big Boss.

Venom Snake is not the only character that the player (or even, the other characters) project upon. The other is Quiet, herself. Because of her silence we don’t know much, leading the player to assume things about her. However, if we assume without evidence at all, we are simply projecting. (I believe some people might say that her silence is another element of her objectification, which may be true, but I think it is for the sake of player projection and furthering the theme of the phantom pain.) Kaz is suspicious of Quiet, but it is Ocelot who projects onto her when he says “She’s in love with the legend,” appending that with his own confession of “I was the same way, once.” Whether or not you believe it to be a fact that Quiet is in love with Venom Snake, there is no way for Ocelot to know this as a fact since Quiet never uses her words. There is no confession, there is only assumption and projection about her motivation.

It’s also interesting to consider that the only characters who don’t project Big Boss onto Venom Snake are Quiet, D.D., and perhaps Code Talker. Ocelot – even if you choose to believe he knew the truth from the beginning – projected Big Boss onto Venom. Regardless of his motivation, projection was taking place.

I believe that choices regarding the overall game design were important to create this concept of projection and disconnection between your agency and action. The audio tapes of the characters talking are kept to elaborate on the plot and flesh things out off-screen, so to speak. The player is never there for these conversations, we hear them all after the fact. It’s one of the acts that removes the agency between Big Boss and Venom Snake. In Peace Walker, the game stopped for us to listen to the tapes, so you could imagine being in the room when they take place. There’s a lot of present radio chatter even in Ground Zeroes. In the Phantom Pain, there’s a barrier between the tapes and reality. We hear them in the helicopter, or driving between Mother Base struts. We are kept separate from the situations where these conversations take place, until the final tape from Paz where she addresses Venom directly. I could argue that many things that people dislike about the design of The Phantom Pain are a nod toward these themes. As far as I’m concerned, the art of cohesion that draws the game together is more important than player pleasure. It’s the difference between a game being a work of art and a way to kill time.

Before the finale in The Phantom Pain, we lose Quiet. By this time, for many people, she has become an asset to the player. She becomes the narrative’s first phantom pain. We move on without her, regardless of how important she may have become to the player’s method. I’ve always loved Kojima’s work, but he is now mastering visual and interactive storytelling without words, and we can see this clearly with the themes of silence and projection in the MGSV trilogy.

Thanks for reading! I also have some things to say about Venom and Kaz’s relationship, which you can find here, in fanfiction form. Also, please consider supporting me on Patreon.