Save the Past! – Storytelling in The Silver Case 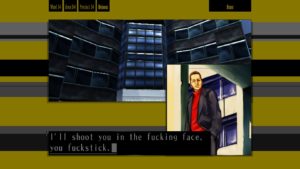 I’ve been starving for adventure games for a long time now, and I’ve been particularly interested in Suda51’s adventure past since playing Super DanganRonpa 2. In October we finally got one of Suda’s long lost adventure games in English for the first time: The Silver Case, and I dropped the full price for it on release day.

For The Silver Case, I’m not going to talk about the story. Elements of it have been harvested into pop-culture which may lessen the blow of the plot on modern readers. In spite of that, there are other structural features in the game that we can still learn a lot from. I want to talk about how the medium tells the story in The Silver Case, with art direction, the Film Window, localization, and the Transmitter/Placebo separated narratives.

OKAY maybe I’ll talk about the story a bit, but more about it’s construction than it’s contents. 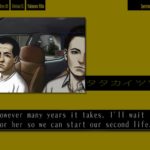 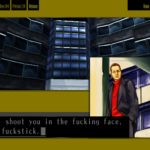 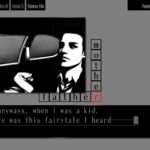 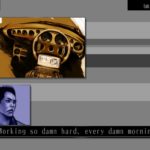 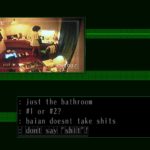 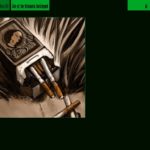 Look at these screenshots. Look at how the background colours and effects change based on the chapter and its theme. Each chapter has its own unique thumbprint that works to set the mood. Starting each new chapter is an exciting experience, as you get to see each style choice and how it will tie into the narrative. I want to point these out so you can think about them too.

The parallel chapters about Morishima Tokio echo the background and trim colours, but nothing else. Tokio’s chapters are drawn in an entirely different art style. I like to compare him to a guy who thinks he’s a detective in a film noir movie. Just look at how he appears in his own chapters (left) compared to how he looks in the protagonist chapters (right). Tokio, you had me fooled. I thought you were a cool noir detective too, but you’re a blonde fuckboy.

The Film Window is what the developer refers to as this unusual page layout used in The Silver Case. Where the idea for this came from, I have no idea, but I am CRAZY ABOUT IT. LOOK AT THESE. 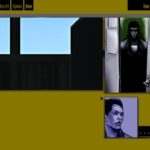 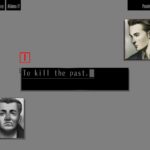 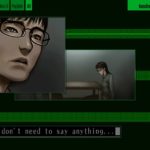 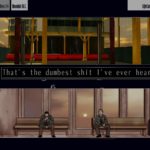 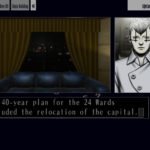 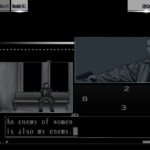 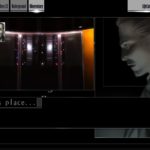 It’s as if each piece of direction taking place on the screen has to be arranged like a comic panel. This is such a challenging way to tell a story, but it’s so incredible that I am frustrated I’ve never seen it before. Please leave a comment if you know of any other story told like this. I want to see it.

In case you play the game I don’t want to ruin too much of the story for you, but please look at each of these screenshots for a while. Look at how an overlayed panel is a camera-zoom, and the art on the right imposes someone on the scenery in 3D on the left. I get particularly messed up by the gun-pointing screenshot. How beautiful and clever is that?!

Here’s a bit less about things we get to look at and more into clever writing expressions, and the localization is remarkable enough that it gets its own section. If you’re interested in reading the chronicle of difficulty that went into localizing The Silver Case, you should read the three-part devlog on the matter. It’s fascinating. The short story is: it took 17 years to localize The Silver Case because Japanese is hard and The Silver Case has many words.

The localization was the first thing I noticed when I started playing the game. The translation does, at times, fall into stilted directness of words that are transferred too literally. The cultural behavior of the characters may not make sense to unglobalized english speakers. These are problems localizers deal with every time they go to work, but every one is a choice carefully made by the team. Suda51 was concerned with getting a translation very true to the original Japanese, and this kept him from bringing The Silver Case into English until now.

I had to do research on this because the language at times felt unbearably out of date, which brought me to the devlog. I, for some time, suspected that there had actually been a translation made in 1999 that hadn’t been released until now. That it had been saved and used without much editing. The reality is that the localization team were just that dedicated in bringing us back to Tokyo in 1999. In the devlog, localizer James R. Mountain remarks that he was familiar enough with Tokyo in 1999 that he could work to capture the everyday feeling of the working peoples’ lives back then.

I’m going to give it to him, entirely because he translated Tokio as “boiling some spaghetti” when we can see ramen on his pool-table desk. Not only did he translate the language of Tokyo in 1999, but he translated in the style of anime localizations of 1999. Good work, James. So far I’ve been talking a lot about the Tokio chapters vs the Protag chapters. By this I refer to the two routes available from the main menu. The transmitter cases are about the main character – named after you. You play a creepy dude working for the Heinous Crimes division of the police force in the 24 wards. You are a silent protagonist. While characters have personal dramas taking place, you don’t ask about them, so they don’t talk to you about them when they don’t need to. At the end of a Transmitter chapter I would often be confused about how facts fit together.

This is where the Placebo chapters come in. On the right side of the opening menu are the supplemental chapters about Tokio Morishima. Tokio was once a crime reporter, and now works as a freelancer hunting down information about our villain Kamui. Since the main character is usually not far from the Kamui case, he often crosses paths with Tokio. The supplementary information that Tokio discovers almost always answers questions about the main plot thanks to Tokio’s freedom from the police force. Later, we also learn things about Tokio from the Transmitter route, so the two narratives feed back into each other. But oh, how the story is told! When was the last time I was so excited about the way a story was constructed and portrayed? The Silver Case is stunning, and I desperately want to see what game developers can do with a Film Window style story.