Webcomics have evolved beyond being what we formally understand to be comics. We use the word “comics” for them because, while they sometimes don’t look like comics or sound like comics, readers don’t have language to call them anything different. We say “webcomics” because they’re often image-heavy stories we read online. I believe that this simplification can be harmful to people who are creating narratives outside the box, because it’s difficult to find our market. How will people know what to look for when what they want isn’t anything like a webcomic?

This is what I want to call a Webcomp: a Composite Web Narrative. A webcomp is a story where the medium is the web, and it utilizes any and all of the features available to it in that format. There is no operating terminology for this form of storytelling that encapsulates what it is. Most often, readers will refer to it as a “webcomic”, in spite of everything that it isn’t, because it’s the best word we have to describe it.

Let’s get into this in some more detail.

Comics are a medium using images and sometimes text to convey a message. Depending on someone’s interest, what they think of as a ‘comic’ might look different – from newspaper funnies to Superman serials. From Family Circus to graphic novels, the important thing for my argument is that comics are a medium, not a genre. Comics are a medium that have subgenres in and of themselves, and can be used for storytelling or other forms of expression.

When I say “medium” here, I’m referring to it as is defined in the arts, which is the tools and format that creates the art. For example, a painter’s medium may be oil paint, or watercolours. A sculptor’s medium may be marble, or clay. Additionally, where paint is applied may also be part of the medium, like canvas, called a “vehicle” or a “base”. This is why in art galleries, you’ll see paintings listed as being done in “oil on canvas”. To apply my metaphor, you might think of comics as “comics on paper”. An artist or a storyteller may choose to work in comics as their medium to express themselves, as opposed to animation or poetry. Here’s a picture of Bonaparte with some comics.

Using what we know comics to be, webcomics are comics published online. It’s just that simple. Mostly.

Comic artists – who refer to themselves as “cartoonists” and will hereby be referred to as such – use the web to serialize their work. Cartoonists would publish their work online to promote themselves with the intent of getting picked up by a newspaper. Even now, webcomics are almost always produced by small-time, independent creators. The web gives people tools to make it easy to create, publish, and market cheaply. It’s a low-risk opportunity for creators to prove themselves, and publishing on the web means they can be as daring or traditional in the format as they like.

In the current era, many webcomics are being picked up by large and small-scale publishers. There’s a lot of faith with aspiring cartoonists that if you make something good, in time, it will come to pay your bills. We can see this in success stories such as The Less Than Epic Adventures of TJ and Amal and Nimona. If something fails, there is very little to lose. If you succeed, there’s a lot to gain.

Let’s talk about some webcomics. Prague Race is a comedy magical-realism story. It’s a traditional webcomic, where the cartoonist draws each page on paper, in pencil or ink wash. The website accents this style as well. Prague Race lays out a common layout for a webcomic, with a click from page-to-page, and a very standard comic style that wouldn’t lose anything when converted to print. ShootAround, a webtoon by Suspu

ShootAround is a comedy survival-horror about a basketball team surviving the zombie apocalypse. ShootAround is a webtoon, which are sometimes more versatile in taking advantage of what it can do on the web. Stories hosted on Line Webtoon are often laid out like this: a vertical format to optimize mobile reading. Feral Gentry is a dark story about fae politics. It operates as a traditional comic, except to use animation for dramatic effect when relevant. Click here for a demonstration.

When the Darkness Presses by Emily Carroll

Emily Carroll‘s work often uses the web as a part of her canvas. When the Darkness Presses demonstrates a traditional comic look with accents taking advantage of the format on the web, including hover-over items, animations, and daring layouts. Ava’s Demon is told panel-by-panel with dialogue, like the colour script of a film. On top of that, it uses music and animation to create cinematics to highlight dramatic events, like so.

No matter how daring the stories above may be with their construction or formatting, it’s clear to most that we can define them all as webcomics. They’re stories that are told published on the web, using images and supplementary text.

So What About Homestuck?

Regardless of whether or not you like Homestuck, it’s hard to deny that it’s something very special. Each page contains one or more image, with dialogue in the form of messenger chat logs. In spite of segments like this or this, we still call Homestuck a “webcomic”. 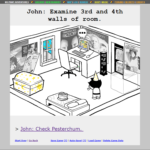 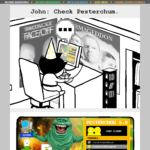 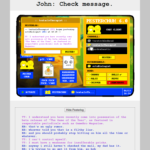 Is it a comic? It does indeed tell a story using sequential art and text, but it consists of more text than images. It also uses gifs, music, cutscenes and game segments, and originally operated on reader-suggested commands. There are many more elements at play here than in typical comics. Some might say that this is an evolution from what comics were, but I feel like that’s selling it short.

But Homestuck is not a comic by way of medium, or even in the way it’s printed. It’s a story of some kind, to be sure, and the base medium is simply: the web. I propose that when the base medium is the web, we’re looking at what I call a webcomp. A photo of the anthology of Homestuck: Act 1.

Putting a webcomp into print means that elements of the story or its presentation are lost, because print cannot encompass everything a webcomp sets out to do. A story that fully utilizes the web as it’s canvas will lose aspects of itself when put to paper, whether that may be interactivity, audio, video, and so on. The above image of a printed cinematic from Homestuck serves as a good example when served with the commentary by Andrew on the bottom:

“Cut out this page, and ripple it gently to emulate the distortion effect in the animation.

Congratulations. Your book is ruined!”

Some elements at play that might mean you’re looking at a webcomp are:

I also want to note that all of my friends hate the word “webcomp”, but here I am selling it to you anyway. I thought it would be useful to have a term that was similar to “webcomic”, but distinct.

It’s important to note that web games also may not be webcomps. Webcomps may use games and interactivity, but consider what the medium is when you’re looking at a story. Is the medium the web? Or is the medium a game?

Here are a few stories that I believe are definitive as webcomps. (Aside from Homestuck.)

RubyQuest started out as an image board game that responded to reader prompts. It has since been completed and exists in its entirety online. The evolution of American football is told in 17776, a webcomp that depends on text, video, and web design gymnastics. Those Without Shadows, by Dawn Davis

Those Without Shadows is a JRPG fantasy story that takes place in the afterlife, to find out who killed god.

In case it isn’t obvious, I finished with Those Without Shadows because it’s mine. Describing what it is has been a struggle for me. I’ve referred to it in the past as “an illustrated story with parts that you play!” Some might simply refer to it as a webcomic, which feels inappropriate to me. There’s more reading in TWS than there is looking at pictures. To me, it’s not a comic. Telling people at comic festivals to read it feels false. “It’s not really a comic,” I’ll say. “It’s a thing.”

I want to say “it’s a webcomp”, and have people know what it means. And I don’t mean this to be an intention just for me, either. I’m sure there are other creators who have their projects and don’t know where to take them because of their alternative format. More importantly: there are readers out there who want to find these unusual, versatile stories, and they don’t know where to look. They ask for webcomics “like Homestuck”, because we don’t have the language to describe what it is. We need the word to describe these different stories so that we can be found and people can find us. There is no terminology being used that serves this purpose.

It’s not a webcomic – it’s probably not like anything you’ve ever seen. It’s a webcomp.

If you know stories that classify as a webcomp, please let me know. I’d love to compile a list to host on my blog here and give a little more attention to this new media.