Consent, Compromise, and Cost – Ladykiller in a Bind

16/11/2016 Games, Reviews Comments Off on Consent, Compromise, and Cost – Ladykiller in a Bind 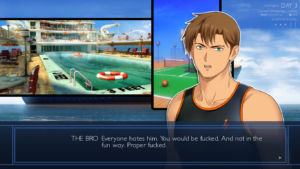 In 2014, my wife and I binged on Christine Love’s work. I watched her liveblog it between layovers on my way to Helsinki, and once I arrived she made me sit down to read Analogue: A Hate Story and Hate Plus. Those two games remain high on my list of visual novels that I will recommend to anyone. When Christine revealed her next game was going to be a exploring the themes of manipulation in dating games for women, I was thrilled. I’ve been watching the development closely ever since.

Today, I finished every route. I feel like Ladykiller is impressive and should inspire visual novels to come, but LoveConquersAll Games has bit off more than it could chew. The theme of this review is going to be an apocryphal line by Samuel R Delany:

“If you’re going to fuck the dog, put it all the way in.”

(The review below contains spoilers, discussion about rape, and nudity.)

Before I get started on the story, which is what I usually all I talk about, I’m going to open with a criticism about the art. When I talk about the art in a game it’s usually about how it works with the narrative blah blah blah. I am a professional illustrator, and the character art of Ladykiller in a Bind has problems. Someone who isn’t an artist may not notice the issues here. I bring them up because the artist and creative partner in LoveConquersAll Games – Raide. His work in Analogue and Hate Plus had flaws, but it was all the more charming for them.

The art of Ladykiller in a Bind, to the trained eye, is a series of stylistic growing pains. Raide has abandoned a very cute anime style to show us more true-to-life proportions with the final vestiges of his anime roots. This leaves things looking weird – especially the heavily referenced scenes of nudity.

Raide, who hurt you? You paid the price for getting caught between checkpoints this time. Brush up on the basics. Work hard to build a foundation, and make the art you like. Make the art you think looks the best and fuck the haters.

If you’re going to fuck the dog, put it all the way in!

The first thing I knew about Ladykiller was that it would be about the manipulation of people in dating games. I love playing dating games, so I was very excited to see this unpacked. It does do a fascinating job of it… about half the time. I’ve gotten this far without talking about the plot at all so I’ll give a quick synopsis. The Beast’s genius twin brother convinces her to crossdress and impersonate him at a sendoff cruise for students graduating from high school. Two people know the truth about this: The Beauty (aka The Princess), and The Boss (aka The Maid). Without understanding his class’ internal politics, The Beast muddles her way through with the knowledge of her brother. Approaching characters with sincerity is often treated with suspicion, since The Brother is a sleazebag who manipulates the people around him. Including his sister!

Manipulation is one of the key aspects of the game. If you think about it, The Beast (and therefore, you are) manipulating all of the people around you into believing a lie. You’re also being manipulated by your brother into doing it. The Swimmer/Slut and The Photographer/Flame are routes that lean heavily on manipulating the Beast. The Boss is just part of The Brother’s game at The Beasts’ expense.

Who doesn’t manipulate the Beast? Most of the other characters. The Lieutenant/Nerd is cranky, but too Lawful-Good to be cunning. The Boy/Flower plays passive-aggressive self-depreciation games that the Beast is wise to and lets you in on with the text. The Rival/President is wary but does little to interfere with your cruise week.

There are many ways these things work together, using Ladykiller‘s choice system which is remarkably versatile. There may be more to this based on behavior that I didn’t see based on my choices, but my criticism remains: If you’re going to fuck the dog, stick it all the way in! If this is a manipulation game, embrace it! Each route could be a balance for power like the Photographer.

Ladykiller in a Bind opens with the following line about consent: In real life, all power exchange must be negotiated. That is to say, there is nothing more important than clearly communicating your desires and limits in advance, without either party feeling uncomfortable or pressured.

Isn’t this idea the opposite of manipulation? That consent requires openness and negotiation, where manipulation makes no such promises? Is all manipulation a violation of consent?

Ladykiller has two actual romance routes that you develop primarily through fucking. For six nights of your cruise you get to choose who you spend the night with: The Hacker or the Beauty? (We’ll talk about day seven later.)

The Beauty has a useful skill where she can remove any suspicion you’ve accumulated by saying stupid things and making mistakes. She’s also one of the most dedicated doms I’ve ever seen. She makes you pay for your mistakes every night you visit, but you can make the choice not to submit to her. On the other end of the spectrum is the Hacker, who is a sweet nerdy virgin. You help to ease her into her sexuality, even though she thinks The Beast is the Brother, no how many times you try to tell her. Is it consent if she’s having sex with someone who isn’t the person she thinks she’s having sex with? Apparently yes, because it doesn’t matter. The text doesn’t go into it much. You can also engage in casual sex with other girls on the cruise as well, and sloppy kissing for some boys also. Consent is key to the intercourse in Ladykiller, even though some of the scenes teeter out of the Beasts’ comfort zone. She’s a good sport about most of the things that happen to her, regardless how the reader might feel.

On night 2 with The Beauty, she asks you to shave your pubic hair. You can protest, but she slaps you into going through with it anyway. The Beast and the Beauty share a safe word, but it’s never used. If we want to make a game about choice and respecting boundaries, shouldn’t there be options available to offer the reader’s safety when they feel uncomfortable?

Which brings me to Day 7. On the final day of the Ladykiller route where you date both girls, there is sex on day 7. The Rival and The Boy are both eager to humiliate/be humiliated by the Brother. In order to save your girlfriends, seducing one of the guys is the only way – because this is a porn game. The Beast makes the most of it, but “transactional straight sex” is misleading. She agrees to sex with these guys because she has no other choice (unless you’ve stockpiled 50 votes). She’s unhappy, violated, and used, and the text sees those feelings through to the reader. The Rival straight up harasses you into performing “enthusiastic consent”. The Boy tries to rescind on your negotiation AFTERWARD because he finds out The Beast is not The Brother. It all works out in the end, but I hope the Beast gets some therapy.

I’m not criticizing that this session of dubious consent (and it is dubious consent and I believe it should be labelled as such) exists. I think that as long as consent is a theme, its boundaries should be explored. The criticisms I have are:

I feel like as a theme, consent culminates like the manipulation theme. The two do not see each other through. Say it with me – If you wanna fuck the dog, stick it all the way in.

If you’re going to fuck the dog, put it all the way in!

(Oh also the backgrounds, music, UI and visual emotes in the game are fucking great.)