The Mental Illness Story We Deserve – Night in the Woods 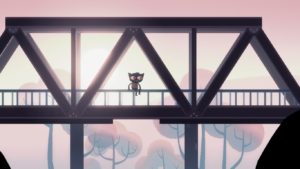 Oh my goodness Night in the Woods was really something.

Night in the Woods is a simple story game and almost-platformer about Mae Borovski when she comes home after quitting college. She returns to her childhood home of Possum Springs, to the place and the people she’d left behind. Why did she quit school? Why is everyone so hostile toward her? Why does she have dreams of giant animals in the woods?

I suppose the title of this review is a bit of a spoiler, but Mae’s battle with her brain is clear from early on. She takes unnecessary risks for no reason, is called a thief and an assailant from people in town, but continues living like she has nothing to lose. Mae slowly reveals herself to the player as a person who isn’t afraid to do stupid and disrespectful things to have a good time, which makes her a difficult person to be with — but sometimes she is just the person you need in your life. She is a wonderful example that is both realistic and sympathetic toward the joy and the struggles of being – and being with – someone who is mentally ill. Mae is charismatic, joyful, and says exactly what she wants. Sometimes she is the person you need, and sometimes she makes things difficult, but her friends and family love her dearly.

I mean it when I say that Night in the Woods is the story about mental illness we deserve, because Mae represents people with cluster b personality disorders – the people who are often highlighted as crazy ex-girlfriends and maniacs. While societal dialogue has opened up about people dealing with depression and anxiety, many other mental illnesses like personality disorders don’t get talked about. I can’t diagnose Mae, although I have my suspicions. I also can say with faith that the writers on this game may have experienced it first hand, or loved someone who did.

Mae copes well, all things considered. It becomes clear that — thanks to where she lives in a small community — her mental illness was not properly treated. She shares a conversation with Bea where they discuss the journal Mae keeps, something she was told to do in order to “repress” her anger. When Bea asks if she means “cope”, Mae stresses: “No, repress.”  Bad doctors and a lack of resources have contributed to Mae not getting what she needs which have put her in her current psychological freefall. As a mentally ill person in a small city, this is an uncomfortable reality for me as well.

Night in the Woods also handles other sad, domestic realities of millennials and residents of small towns. Mae’s family fight with money problems which at times they can’t help but to take out on her. Her friends have their own issues that she isn’t privy to that cause dramatic miscommunications. The residents of this town struggle to find fulfillment while they keep their heads above water. While Night in the Woods is very cute, and fun to play, I might also warn people away from playing it on the basis that it is simply too real. If you’re looking for some joyful escapism, this might not be the right game. If you are looking for a story that will put the finger on some of the emotions you’re feeling as a small town resident/millenial/mentally ill/gay person, that is what Night in the Woods will deliver. It hurts, but it’s a cathartic hurt.

There are a few things I would criticize about Night in the Woods, but it’s all stuff that would improve the overall game and doesn’t matter much in the grand scheme of things. The banter is good. The relationships are incredible. The characters are amazing. It’s just hard to read their conversational tones with no voice acting, minimal character animations, and no expression in the text.

There are a lot of things I loved about this game, and I suggest that you play it, if it’s what you’re looking for.