Waifu simulator VA-11 HALL-A is by Otaku, and for Otaku 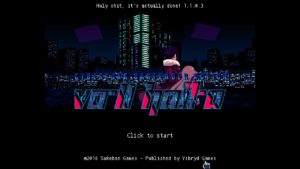 After playing and adoring Read Only Memories, VA-11 HALL-A came up on my radar. It is also a Japan-inspired visual novel style game with lots of text which is, as you may have noticed, My Thing. VA-11 HALL-A is described on its Steam page as a “booze-em up about waifus, technology, and post-dystopia life.” To be frank, if nothing about that sounds strange, VA-11 HALL-A was made for you.

I managed to receive VA-11 HALL-A by Sukeban Games providing me with a promo copy for review. I feel terrible about this, but I refuse to compromise my honesty for the sake of my guilt. I also appreciate Sukeban Games’ generosity in taking this risk in giving the game to me, and I hope they accept my words as a friendly critique rather than bitter criticism.

tl;dr it was cute but it didn’t fully acknowledge the plots I liked, and it made me feel objectified. I give it a solid 5/10 VA-11 HALL-A is a sleepy little bar in one of the shadier parts of Glitch City. You play as Jill, the bartender, and work to mix drinks and change lives. VA-11 HALL-A is, for all intents and purposes, a visual novel with the drink-mixing playable aspect that earns you cash that you can use to pay your bills and buy some toys. There are various results and endings that are all based on how you serve your customers and handle your money.

VA-11 HALL-A is wonderful in these respects as well as in its cast. Each of your bar regulars are special, bright, and interesting, even when they’re intentionally repulsive. They all have their independent lives and come to you in the off-hours and feed you information about the goings-on in Glitch City, in addition to what you can read in the news. Our protagonist, Jill, is a pretty yamato nadeshiko-style girl (although it’s explicit that she is white) who tends to be cold and kind of a bitch. She carries a torch for her boss, Dana, who is mysterious and caring toward everyone. Dana makes Valhalla a safe haven where she hides people being stalked and her drunks can take a nap, and where the underdogs of society can speak freely. The AI revolution has come and gone and humans live with prosthetics, robots masquerade as humans, humans are spliced with animal genes and animals are intelligent.

When I started, I wasn’t sure what to expect from VA-11 HALL-A. I was interested in a good plot with interesting characters, and what I got was a waifu simulator. I was about halfway through the game when I caved and researched my suspicion. Surely enough, VA-11 HALL-A was made by two men. A spectacular amount of work was put into this game, and I respect them for it, but let’s go into each of your waifus in horrific, critical detail. Many spoilers ahead. I have no shame admitting that these two girls were my favorite.

On the left of the image above is Alma. She’s a hacker who has biotic hands in order to work quickly and prevent carpal tunnel syndrome. Alma has a big family and is extremely passionate about supporting family values. Alma is heterosexual, so her relationship with Jill is purely platonic. It comes up early that Alma dates a lot of boys, but her arc is about coping with her sister, who is having a mid-life crisis. To deal with her frustration, Alma comes to the bar and screams out her anger, yelling about how her sister is a shameless slut. She does not make amends with her sister, and does not try to understand her. Alma’s arc ends with her accepting to dislike her sisters’ actions. (I won’t go into more detail about this, but I hope it’s obvious why this is troublesome.)

On the right of the above image is Dorothy. Dorothy is a Lilim (android) with the appearance of a girl 10-12 years old, but is in fact 23. Dorothy is a sex worker who hits on whoever happens to be in the bar when she arrives, including Jill. Dorothy’s arc is an existential one where she wonders what it means to exist in the world. It has nothing to do with how she is a sex worker who appears underage. When asked by Jill why she hasn’t upgraded to an adult-looking body, Dorothy credits her niche clientele.

The last character who receives a full proper story arc is Sei, who is a member of a police organization called the White Knights. Although they are notoriously corrupt, Sei has a genuine belief in what they’re doing. She’s a meathead with a heart of gold and is the only character who has anything to do with the politics in Glitch City. Eventually there is an incident in a bank where all of the White Knights undergo an emergency shutdown and the entire organization is dissolved and a lot of people die, leaving Sei at zero to rebuild her life. Did that stuff about the White Knights sound interesting to you? Are you fascinated by the construction of Glitch City, its’ problems and cyberpunk corporate bullshit? Are you wondering what about VA-11 HALL-A makes it “post-dystopia”? Yeah, me too. The story barely gets into it because VA-11 HALL-A is a waifu simulator above all. See: Sei’s arc. I was fascinated by the potential political landscape of Glitch City and the corruption issues in the White Knights/police force and looked forward to seeing what more would be done with it, until I saw the credits rolling. Sukeban Games had an interesting plot, but chose not to follow through, instead using the world state only to build character development. I have no problem with how Sei is developed, only that the events that cause it exist almost solely for her sake, rather than for her to be a victim of something that happened in her world (although I should mention it also led to the bar being closed for the day and Jill and Dana getting drunk together). The aftermath of what happens with the White Knights is accounted for but nothing else is done with it. The world exists for the sake of these characters to be in it, rather than the other way around; it’s more about waifus than technology and post-dystopia life.

All of the male characters in the game (besides one) are harmless, declawed and non-threatening, even if their line of work is killing people. This leaves sexual discussion mostly to the women, who talk about sex quite a lot. I believe the intention of this is to empower the female characters, but the ideal falls flat when I can tell that the script is written by men. I am a woman who is married to a woman, and while I do chat to other girls about breast size and sexual adventures, knowing that the text is written by a man as Jill describes what her ex did to a cucumber makes me feel intensely othered and alienated. I feel like these characters are puppets with men’s voices talking about my life, and it feels awful. At times they seem that they are only there for the (male) reader’s adoration to begin with. This is exceptionally clear when we talk about how Dorothy is treated. Dorothy is the darling sex worker who is very hyper-sexual in her personality and language, but her aesthetic brand keeps her from wearing skimpy outfits. Let me reiterate that her arc is about existentialism. Her arc is about existentialism. While Dorothy does provide some non-sexual services to her clients, the glaring issue here is not acknowledged as the predatory risk that it is. Dorothy is a sex worker who looks like a twelve-year-old girl not because it would be a fascinating plot, but so she can safely appeal to people with a lolita complex and embody the Older Than They Look trope. There are so many things that could have been said with this character, and VA-11 HALL-A does none of them, which tells me she looks the way she does to pander to readers who have a Type: the legal-aged girls who still appear prepubescent, so they are both sexy children and consensually safe. (See: Nowi) I’m torn about VA-11 HALL-A because it had so many interesting things happening, but I cannot ignore the problems listed above. I do not believe that the Sukeban writers had any malicious intent upon writing these things, but they were certainly overlooked. Sukeban, I implore you, please hire a female writer for your staff, or a critical editor. If you disagree with my criticisms, it is your right as artists to reject them, but I don’t think I’ll play your next game. Without a woman on your team, your game is by men and for men, therefore cutting out a large part of the visual novel playing audience, including myself. Turn it up, Sukeban! I’m watching you! WTF IS HAPPENING HERE PLEASE EXPLAIN IT TO ME??? NO??? I GUESS NOT.