Yakuza Games Ranked by How Much I Liked Them

28/12/2022 Games, Reviews Comments Off on Yakuza Games Ranked by How Much I Liked Them 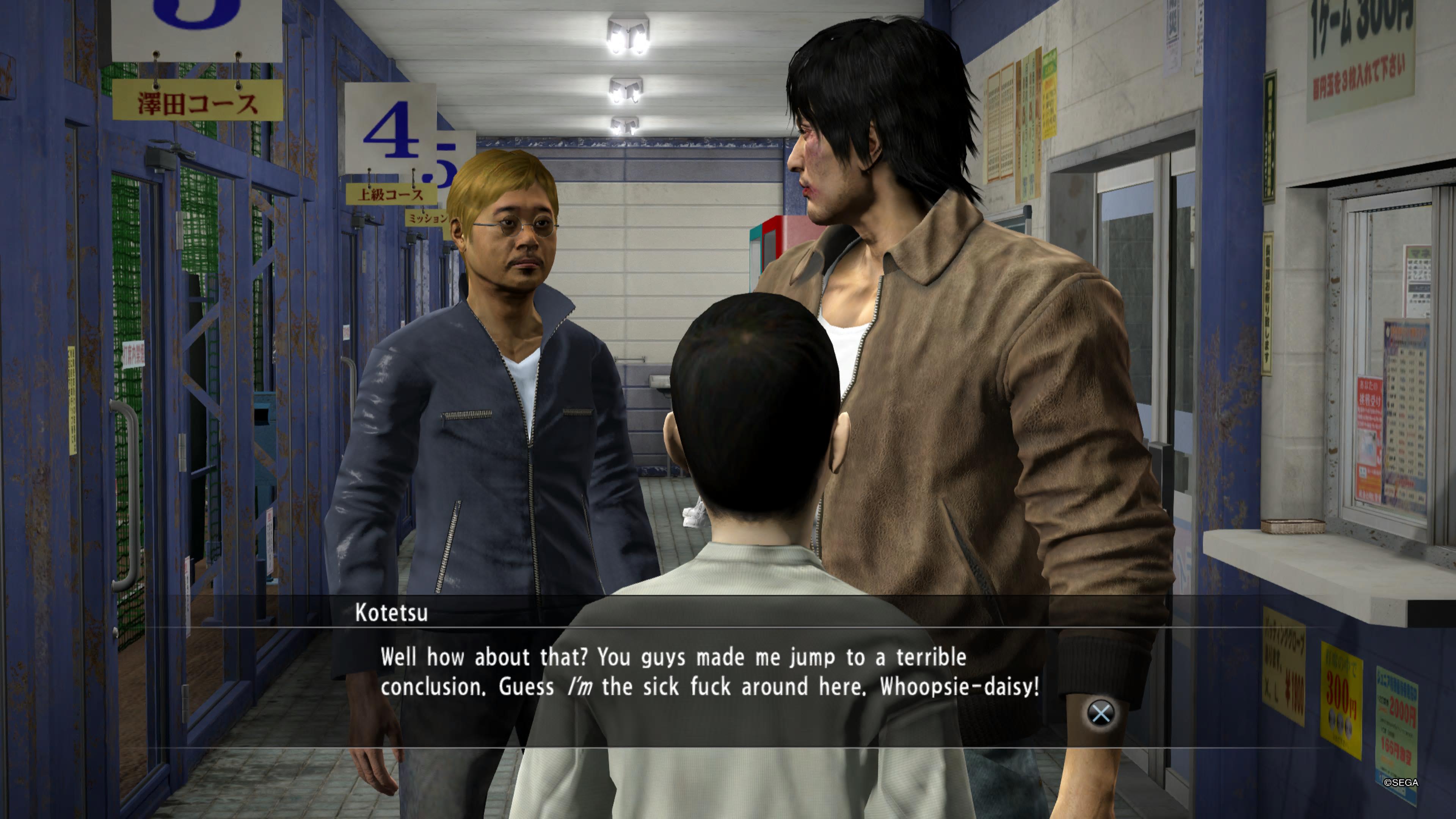 As I mentioned recently, 2022 was tough for me.  Some of my friends were excited about Like a Dragon, but I didn’t want to play it until I played all of the other Yakuza games because that’s what I’m like. I hate skipping things.

During this stressful year I found it easy to move from one Yakuza game to the next without having to apply new and unique brain power to an entirely new game. As such, I played almost only Yakuza series games. I’m afraid to find out how many hours I spent on them when I turn on my ps5 to install Like a Dragon. It’s going to be a lot.

Anyway here’s the list in reverse order to build suspense. This list is ordered to my own tastes and therefore you cannot judge me.

Yakuza 6 has a really solid story and a lot of good characters, but I really hate the Dragon engine for Yakuza games. I feel like it could work for a game like Judgement that isn’t the same sort of power fantasy as Yakuza, and it seems like they do good work with it in Like a Dragon, but I find it feels bad for Kiryu and also, it’s ugly. Everyone’s so stiff and it’s awful. I really hate it.

Again, the story of Yakuza 6 is quite good, and I think it’s a good finale for Kiryu. However the game suffers with the Dragon engine and having some fan-favorite characters take a back seat. I understand that they had to be set aside in order for Kiryu to end up where he does, but I missed them anyway.

Yakuza 2 feels much weaker when it comes to plot construction compared to Yakuza Kiwami, which has been brushed up in a lot of respects. It also suffers with the Dragon engine, which is stiff even while it is beautiful.

While the plot doesn’t feel quite as strong as in Yakuza 6, Yakuza Kiwami 2 beats it in a contest just by having the cabaret club minigame.

More importantly, it has Sayama, who I like very much, and the story does her dirty the whole time. Her character is excellent in spite of how little the game serves her as anything more than a plot device. I also really love Daigo, and felt like he also wasn’t fully utilized. The series would disappoint me time and time again in that respect.

Yakuza 5 is a game design five-car pile-up of a game and I enjoyed it very much. In my sad 2022 brain, I spent so much time playing all the minigame side plots for each playable character that maybe it’s a little embarrassing. Each one was unique and delightful, so it was something I could enjoy doing instead of thinking about depressing stuff. I was really sad when it was over.

It’s also a disaster from a narrative perspective because of how long the game is and how much time I spent losing the plot by driving a taxi or playing baseball. I wish it spent more time ruminating on Kiryu’s emotional state. I could have enjoyed an entire game about where he is psychologically in Yakuza 5, but I also wouldn’t change what it is because it was exactly what I needed and at the right time. It’s deeply flawed and deeply delightful and I’m fine with it.

I wish I could give it a higher rank just for the Akiyama dancing games.

I get the impression that Yakuza 4 is the series’ darling, and I can see why. The developers decided to do something really different and it was very good. The new format has its hiccups, but 4 is a great time, and we get to see a new side of Majima. Also, we’re introduced to Akiyama, who is the best and I love him.

I’d like to take a moment here on an aside and ruminate on Tanimura, the player character who doesn’t return later on in the series. It’s interesting to imagine being behind the scenes of SEGA when they were brainstorming on where to go with Yakuza 4. All these characters had to be made from whole cloth. After all this time it’s hard to imagine that it was at this time (presumably) that Saejima was conceived, considering the narrative weight he comes to carry on his own. Akiyama is beloved but loiters on the fringes of the Yakuza series’s titular subject matter. If there’s one thing that all of the Ryuu Ga Gotoku protagonists and friendlies have in common, it’s that they have a heart of gold. They might do terrible things, but when you unearth their reasons, they come from good places and are usually understandable.

Tanimura, the “parasite of Kamurocho” is the Genbu of the four, an enigmatic type with all the trappings. He accepts bribes and gambles so he can support an underground effort to support victims of human trafficking from other Asian countries to Japan. I feel like his “heart of gold” on display in this act makes him the least interesting. He’s not just a corrupt cop, he’s corrupt for good! Which isn’t quite so much fun. But for him to fit better I think he would have had to swap some character aspects with Saejima and Akiyama, and I wouldn’t change anything about them.

Another thing I love about Yakuza 4 is how it ups the ante about who it discusses as a vulnerable people, acknowledging that Japan is not innocent of letting people fall through the cracks. And yet, I still liked Yakuza 3 more.

Yakuza 3 is a disaster and deeply boring at times, but I think it has a strong plot and the characters are fantastic. Funny, considering the minigames are a big deal for me in the other games in the series, and I don’t like any of the ones in 3. However it does debut Where Has Your Touch Gone which is the most underrated karaoke song in the series. Fight me. Also it has like, twenty cabaret club girls to date. I only bothered with a few of them, because it was too much even for me.

I really, really loved the story of Yakuza 3. I loved the new characters we were introduced to. I loved Mine and Rikiya and felt really betrayed by where the story took them, which is my major complaint. The kids at the orphanage are super annoying but I enjoyed seeing Kiryu’s paternal side. Unlike everyone on the planet, I wished we’d spent more time with them in later games. It seemed everyone else in the world wished they were dead.

Yakuza 3 might also have my favorite side quest line in the series so far, where you help a group that is working to help members of the yakuza leave the organization and start over. You run around and find dudes who are eager to prove themselves in spite of how the yakuza have betrayed them, and help talk them back into sticking to the path. That quest really helps to outline what Kiryu chose to run away from, and why he struggles so hard against the tide that pulls him back to the Yakuza. I really recommend you don’t skip those ones.

I started the series with Yakuza Kiwami and I always recommend people do the same, although it’s an unpopular opinion. Yakuza 0 is really strong, but I feel like starting there reveals a different side of Majima that you can’t appreciate until you already know him. Alternatively, if you play Kiwami first, you might not understand the precious relationship that Kiryu had with Nishikiyama. Considering that most people care a lot about Majima, I think that Kiwami -> 0 is a better Majima picture. However I love Nishikiyama, and maybe I should have done it the other way around. It’s okay, I love both games anyway.

Although Kiwami doesn’t have the cabaret club minigame, it does have Nishikiyama and pocket circuit racing, which is my other favorite minigame.

Kiwami is the only Yakuza game that I actually did not play in 2022. I played it maybe in 2020 or even 2019, so my knowledge of it isn’t as strong. Still, I love it and think the series debut is excellent and the Kiwami remaster has served it well.

I debated on this for a long time but I think 0 wins, not for the usual reasons, but because it has both pocket circuit and the cabaret club minigames. The two of those alone can keep me entertained for hours, with or without the strong plot. Also Kiwami/0 have the most aesthetically pleasing version of the mahjong minigame.

I feel like I should have more to say on 0 than this but I also feel like it’s already been said. What more is there? Everyone loves 0 for a reason. It’s an excellent game with an excellent story, with plenty of Nishiki and Majima and even fanservice of other characters, like Daigo in a little bowtie.

Anyway, so those are my opinions. Feel free to fight me in the comments if you like, but you’ll lose because they’re just my opinions.